How do you know which candidate is most likely to win a Prince George’s County Board of Education race? As with any election, there are many factors at play. Some aspects of the candidates and races may be too difficult to analyze objectively, such as the quality of the candidates’ ideas, campaign skills, and personal effort put into campaign activities. However, many important factors affecting the campaigns are quantifiable and easily compared.

In order to determine what factor has the greatest impact on the election results, I set out to analyze the 2014 BOE races in Prince George’s County. Based on my knowledge about our elections, I identified the following four factors as major potential contributing factors to a candidate’s success:

To refresh everyone’s memory, here are the general election results for the four BOE elections held in 2014: 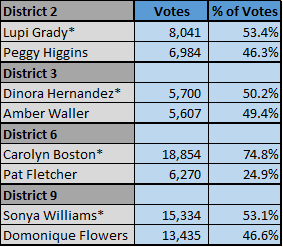 And this is how the analysis of the four major factors came out:

* Williams was appointed to the District 9 seat less than a year before the election
** Includes endorsements by the Washington Post, Gazette, and Prince George’s County Educators’ Association

To better identify the factor that appears to have the greatest impact on the election results, the following color-coded table indicates the factors where each candidate had a clear advantage (green), disadvantage (red), or the candidates were somewhat equal (yellow).

Determining which analyzed factor best correlates with the election results is not very difficult.

One thought on “Party Endorsements Are Major Factor in Board Elections”