How well did county students do on the 2014 SAT? In the table below, each PGCPS high school’s average (mean) SAT subscores in critical reading, mathematics, and writing are given below, along with the mean composite score. According to the 2014 Maryland Report Card, these are the mean scores for college bound seniors. The maximum score for each subtest (i.e. reading, math, writing) is 800, and the maximum composite score is 2400. Data for the 2015 SAT scores is not yet available. (Update: Find 2015 SAT scores here.) 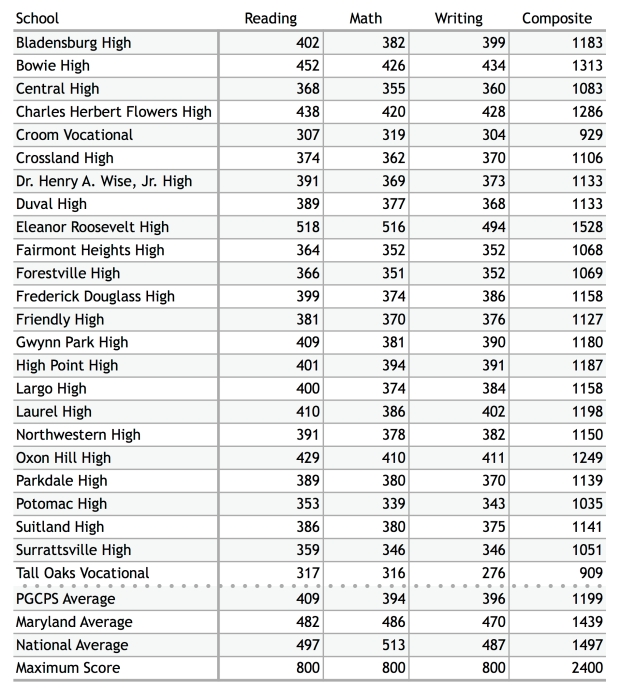 To put PGCPS’s SAT performance into perspective, it is useful to compare the county’s scores with those of other test-takers in the total group (i.e. students across the U.S. and Canada) of 2014 college-bound seniors.  The College Board has published a table with the 2014 percentile ranks for the reading, mathematics, and writing SAT subscores.

When looking at these admittedly dismal numbers, it is important to note that the usefulness of the SAT and ACT as predictors of success in college has been questioned in recent years. Some colleges and universities no longer require that students submit SAT or ACT scores. Many have criticized the SAT and ACT as being racially biased and highly dependent on socio-economic status. Wealthy parents often pay for their children to take prep courses that are guaranteed to raise test scores, though some have asserted that such test prep course only account for a modest increase in scores.

Certainly, SAT scores are not the primary measure of success of a school system. They can, however, give us at least some insight into how well our students are learning the core subjects.