We’re nearing the end of 2016 already, and are moving into the second part of the school year. It’s flown by so fast, but we are enjoying — and surviving — kindergarten!

Our son has adjusted well. He loves his teacher (she really is great), he has some favorite classes (computer and P.E.), and he is doing really well. We are just as pleased today as we were when we visited the school back in the spring. Here are some of the reasons why:

We are so happy and blessed to be having such a wonderful experience thus far. We look forward to watching our boy grow and mature in his time at his new school and will be looking forward to his brother joining him there in just a couple of years.

This is the fifth part of a series documenting the steps one family is taking to prepare for their son’s entrance into kindergarten next year. Read Part 1 here, Part 2 here, Part 3 here, and Part 4 here. 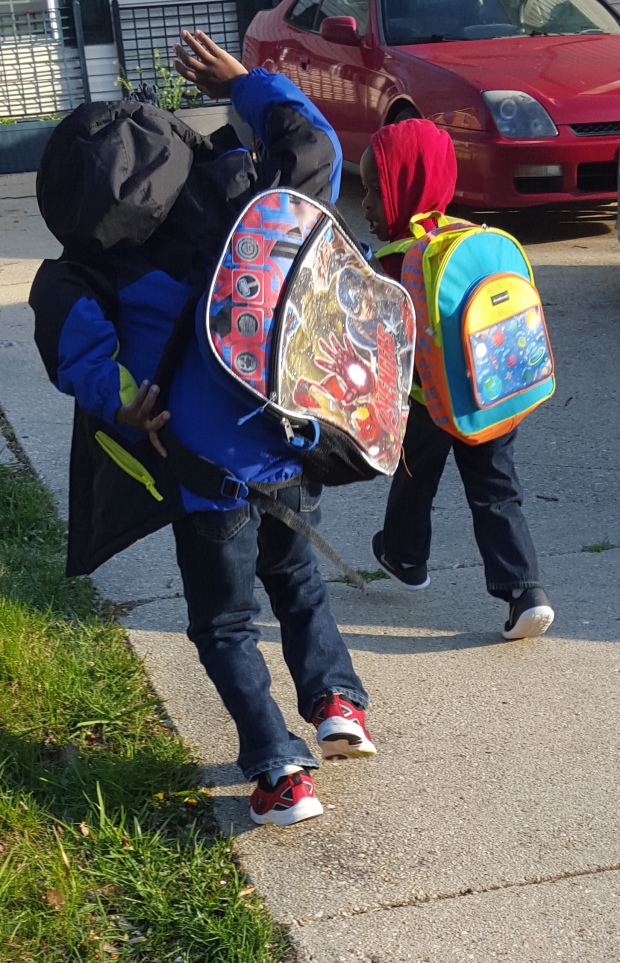 It’s official. Summer is here, and now that we’ve celebrated my son’s graduation from preschool, we’re starting to prepare for the school year. And now that we know where he’ll go to school, I thought that it would be a good time to share how we arrived at our decision.

In part four of this series, I wrote about our visit to the school on the other side of our neighborhood, and how impressed we were. Not long after, we finally got word that our neighborhood school was offering new kindergarten families a tour of the school. We were encouraged to bring our son along, but we opted not to because we didn’t want to get him excited about a school he might not attend.

On the day of the visit, I had an open mind and was very interested in learning about the school. The principal apologized to those of us to whom she hadn’t been responsive. I appreciated that. During the tour we later learned that her delayed responses were due to PARCC testing.

Much like the tour at the “other” school, we walked from class to class and were able to peek in at what was going on in each room. At both schools, we were told and could see all that is offered to students. But here, something was different. Maybe it was the excitement in the principal’s voice, or that there’s a poetry slam night, during which students perform. Maybe it was the retired art teacher who returned to the district and was now at this school just to ensure that students could experience art class on a bi-weekly basis, or that the students had created musical instruments for a project. Maybe it had something to do with the tone the principal took with the children she encountered in the halls, ensuring that the boys’ shirts were tucked in, thanking them for good behavior, and offering them bucks as a reward. Whatever it was, it felt like a good place for my child to be.

END_OF_DOCUMENT_TOKEN_TO_BE_REPLACED

This is the fourth part of a series documenting the steps one family is taking to prepare for their son’s entrance into kindergarten next year. Read Part 1 here, Part 2 here, and Part 3 here. 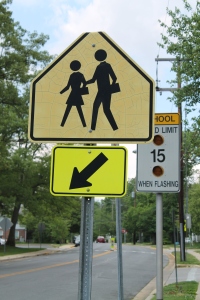 In my last post, I told the story of my unreturned calls to our neighborhood school. I had wanted to tour the school but was unable to get in touch with anyone who could help. I was, however, able to make an appointment to visit the school on the other side of the neighborhood, the school where a number of children who “graduated” from my son’s preschool attend. We are hoping that this school—a TAG school—will be an option for us.

On the day of the visit, we were running a few minutes late. Though I called ahead to let the front office staff know, I was a little nervous. I thought, What if we can get into this school, but our tardiness hurts our chances? I quickly brushed that off and instead turned my thoughts to the questions I needed to ask about the school, the schedule, and our chances of getting in.

When we arrived, we were greeted by the school counselor, who would be our tour guide. I thought it was nice that they had a designated person to do this for parents interested in the school.

We walked through the halls, peeking into classrooms along the way. I thought to myself, These children are working and focused, but not stressed or overwhelmed. At one point, we passed students walking through the halls with their teacher. My former-teacher self praised them, in a whisper to my husband, “Look at how on-task they are!” I was giddy, both as a parent and as a former teacher. Maybe it was the sheer excitement of checking out a school for my first-born and imagining the possibilities he’d have there. They offer World Languages at this school, and notebook laptop computers. There’s also a computer lab available so that teachers can bring an entire class at a time! I was pleased. My husband and I were both pleased.

END_OF_DOCUMENT_TOKEN_TO_BE_REPLACED

May 3, 2016May 13, 2016Leave a comment
This is the third part of a series documenting the steps one family is taking to prepare for their son’s entrance into kindergarten next year. Read Part 1 here and Part 2 here. 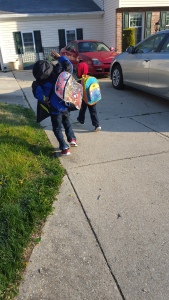 Since my last post, there have been some new developments in our family’s journey to kindergarten.

Back in early March, I made a call to our neighborhood school. Since, as far as I knew, this school did not schedule open houses or group tours for prospective parents, I wanted to set up an appointment to tour the school. I briefly explained to the secretary who answered the phone that I’d be registering my child for kindergarten and would like to come in for a visit. She didn’t sound at all surprised, which actually surprised me, and gave me the feeling that school visits (even to one’s neighborhood school) are a normal thing. She said the principal would call me back (which was also surprising—I would have direct access to the principal?), but that it might be a couple of days. “No problem,” I said. Having taught elementary school, I know how it is.

I figured I’d get a call back that next morning, but it didn’t happen. Each day that passed, I got excited about seeing my son’s potential school, and held out hope that I was somewhere on the principal’s priority list. But apparently, I wasn’t.

After a week had passed, I thought to myself, I’ll give it more time. But almost in the same moment, I thought, she’s not going to call me back.

So I decided to try again.

I spoke to a secretary—the same one, I’m pretty sure—and she said they had been very busy, and that state testing was in progress. In fact, that was the reason that I hadn’t heard anything. The secretary assured me that she would pass along my name and number again. The call ended with my saying, “I understand. Thank you.”

But something didn’t sit right with me when I hung up. I thought about it for a bit, and it occurred to me that maybe I could enroll my son at his neighborhood school (as required by PGCPS) and potentially submit a transfer request before the school year even begins in August. And if that transfer request is accepted, maybe I could send him to that other school— the same one that his classmates from preschool attend—if that’s what we choose.

END_OF_DOCUMENT_TOKEN_TO_BE_REPLACED

February 10, 2016May 3, 20161 Comment
This is the second part of a series documenting the steps one family is taking to prepare for their son’s entrance into kindergarten next year. Read Part 1 here. 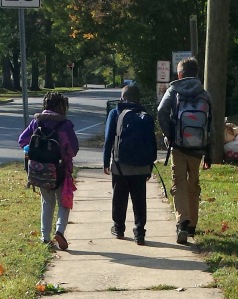 In my last post, I explained that I thought that we could pretty much choose where to send our son for kindergarten next year, within the Prince George’s County Public School system.

I got clarity from my friend who had been through this process. You must first register your child at their neighborhood school. Once your child is enrolled and assigned a student ID, you may then submit a transfer request.

We’re not interested in an immersion program or charter school at the moment (but could be–more on that later). So we’re planning to send him to our neighborhood school. But we want to check it out first.

END_OF_DOCUMENT_TOKEN_TO_BE_REPLACED

December 3, 2015May 3, 20163 Comments
This will be the first part of a series documenting the steps one family is taking to prepare for their son’s entrance into kindergarten next year. 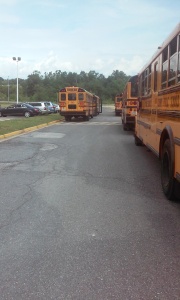 My oldest son recently turned five years old, which means that we’ll be parents of a kindergarten student next school year. While some parents living in Prince George’s County choose private school for their children, my husband and I have decided that our kids will at least start out in public school. Despite the overall negative reviews Prince George’s County Public Schools tend to receive, we’ve heard good things about our area school. We’re thankful for that because we think it’s a good idea to at least give PGCPS a try.

After all, I taught in those schools as an elementary school teacher for three years and saw many students excel — from students who simply completed their assignments on time and received good grades, to those who were admitted into the Talented and Gifted (TAG) program, to those who went on to magnet programs in middle school. PGCPS does have opportunities for those who work hard and take advantage of them.

As we count down the months until August 2016, my husband and I are in prep mode. We are constantly gathering information–whether from the PGCPS website or friends–so that we are armed with all the information we need to ensure that our son has a strong start in school.

END_OF_DOCUMENT_TOKEN_TO_BE_REPLACED

My son attends our neighborhood school as a kindergartner this year. As a product of Prince George’s County Public Schools myself, I knew that school would be different for my son: I just didn’t realize ho 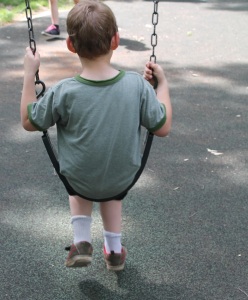 w much. For instance, at the orientation I learned that his school gets only 15 minutes of recess daily (weather permitting). When I attended kindergarten, I went for a half day. We had 30 minutes for lunch, then 30 minutes for recess. We used construction paper, scissors, crayons and glue. We played “house” and dress up. We used blocks to build structures. School was fun.

Now, students don’t go outdoors when it’s snowing, raining or too windy. Instead, they have recess indoors. This may include playing “quiet” games (e.g. board games), free play with manipulatives, or going to classroom “centers” (e.g. library corner, science area, drama-imaginative play). Although he receives regular Physical Education classes, this does not take the place of recess. Recess is a break that would allow children to play (or not play) as they wish. I want my child to have a break from his learning and more time for movement and creative play.