Last month, my family made the big, scary transition to home schooling. For years, I was one of those parents who proclaimed loudly and repeatedly, “I could never, ever home school my children! People who do that must be crazy!” However, after a less-than-ideal public school experience, we were having a hard time getting our children to maintain a positive attitude about learning. I felt like we needed to hit the reset button, so I took a deep breath — okay, several deep breaths — and filled out the application to home school. 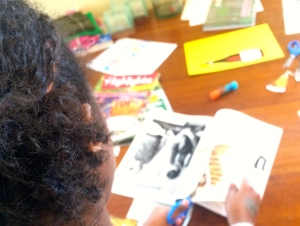 Parents wishing to home school in Prince George’s County essentially have two options: 1) join an umbrella group that will oversee your home s
chool or 2) create your own curriculum and submit a portfolio to PGCPS for review. I decided I wanted to be on my own rather than join an umbrella group. Research told me this would mean participating in two PGCPS portfolio reviews each year. Ack! Scary! I read horror stories online about other parents in Maryland who had terrible experiences with their portfolio reviews. These stories had me convinced that at portfolio review time, I would have to sit across a table from some judgmental person in a suit yelling at me that I was a terrible teacher and a complete failure as a parent! (Note to self: Don’t read the Internet. The Internet is terrifying.) I was so intimidated that I very nearly gave up. There was no way I could do this!

Just when I was beginning to lose my nerve, I attended a PGCPS workshop for parents who are new to home schooling. It was led by the PGCPS Home Schooling Office, which is responsible for providing support and ensuring that parents are complying with Maryland state law. The workshop was fantastic. They reviewed what the law requires, discussed what is entailed in a portfolio review, and even shared some sample portfolios. They came across as very knowledgeable and experienced. Most importantly, they were kind and helpful. It was not scary at all! For me, the greatest value came in the reassurances from PGCPS staff that their goal was to support parents, not judge them. As long as I was covering the required subjects* on a regular basis, I could teach whatever I wanted, however I wanted, and no one was going to yell at me. If I wanted to plan a physical education lesson on how to juggle live mice, I could do that. I would just have to document it for the portfolio.

END_OF_DOCUMENT_TOKEN_TO_BE_REPLACED

Last August, I withdrew my son from Prince George’s County Public Schools and began to home school him. This was a big step on many levels, impacting not only the environment of my child’s day-to-day life, but also my expectations for his future, our goals for his learning, and the financial security of my family. So why did I do this? From my perspective I had very little choice; it has turned out to be a very good decision.

My son’s elementary school treated him as a behavior problem that could not be solved. His behavior became more of a problem the more he struggled with his environment. He spent most of every day struggling with feeling overwhelmed. The school viewed him as extremely defiant and disorderly, but in fact he felt unsafe, overwhelmed, and incapable of learning. The message that he received from school is that he was a failure at learning and conforming. He became angry; his teachers became frustrated.

My son entered kindergarten in PGCPS with a recent diagnosis of a neurological processing issue. Although I brought the issue to the teacher’s attention before the first day of school, I waited until the end of kindergarten for a 504 plan.

The next year, things went downhill in terms of his behavior and learning. The school conducted a battery of tests, with some prompting from me subsequent to external visits to multiple doctors. The testing returned a wide variety of issues, including learning disabilities, sensory issues, processing problems, ADHD, and giftedness. After all of this, my son received an IEP in the last week of April his first grade year. He began to receive some supports for reading and behavior.

I had some objections to the school’s approach, and I was told, “Don’t worry, let us try this. If it doesn’t work then we will adjust it.” So I trusted the school. I waited. When I got the notice for the next IEP meeting, the stated purpose was to review progress. That sounded right to me.