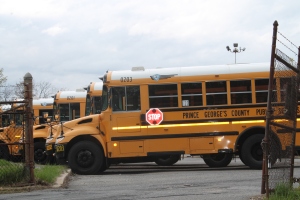 The Prince George’s County Board of Education held its last meeting of the school year on June 14th and adopted—in a 9 to 4 vote—a $1.93 billion Annual Operating Budget for Fiscal Year 2017. Dissenting votes were cast by Edward Burroughs III, Beverly Anderson, Verjeana Jacobs, and Zabrina Epps.

The budget was significantly smaller than the $2 billion that the Board had requested from the County Executive in February. Dozens of cuts were made during the budget reconciliation process, including the $1.27 million proposal to hire 25 additional bus drivers for the 2016-2017 school year.

While the issue of bus transportation was by no means the only topic of the evening, it got plenty of attention from parents, students, Board members, and PGCPS employees. Here are some highlights of the transportation-related comments made during the meeting.

I was disappointed to see that the additional 25 bus drivers were cut in the reconciliation budget. The ongoing shortage of bus drivers has led to doubled-up routes, significant delays, and even the inability to answer the transportation hotline in the morning, because staff are needed to drive . . . Without the additional drivers, I sincerely hope that the transportation department is spending the summer looking for a more efficient way to get students where they need to be, because what we have now is not working well. Students cannot learn if they cannot get to school.

A Northwestern High student representing the Hyattsville Teen Advisory Committee at 1:11:17 (this is a must-watch testimony):

We did some research to find out what was causing the problem of late school buses, and we found two causes: poor pay and poor working conditions [boisterous applause from audience].  .  . [Bus drivers] are often disrespected by students on the bus, and students say that they don’t even know their bus drivers’ names. We recommend that all schools include bus drivers in their orientation at the beginning of the year, and the principal introduce the bus drivers to students and review the rules and consequences for riding the bus [more applause from audience]. We recommend that the school board pass a bus driver appreciation day for the district to honor and recognize the work of bus drivers who support our students and their schools.

Jossalyn Ford, chief steward for the Transportation Chapter of Local 2250 bus driver at 1:17:26:

We work very hard every day to transport the children who attend Prince George’s County Public Schools to and from safely. As we approach the end of the year, we are short of help. As you have very well know that we are doubling, tripling runs. We are tired. We’re doing our very best to transport these kids every single day. But as we do so, we have bus attendants also working with us who have been waiting two or more years to become permanent, to have benefits. HR keeps saying, ‘We don’t have the positions.’ They don’t have the money to hire these people.  .  . And we, as a local, can’t defend a sub-employee .  .  . But I’m telling you right now, we cannot go into next year doing what we’re doing this year.  .  . We have meetings on a month-to-month basis, where we come together and try to address all these issues, and nothing is being done.

I’m mom of a third grader at Tulip Grove Elementary, and for the past several weeks, we’ve been experiencing inconsistent and unreliable bus pickups in the morning. In particular, because of the doubling up on the routes and the tripling up on the routes, you know, sometimes it will be fifteen to thirty minutes before the children are picked up to go to school. We’ve had occasions when the bus just hasn’t appeared .  .  . [W]e could use some communication in some way shape or form, some kind of system in place that could notify parents of an issue, if a bus is going to be late, if a bus is not going to arrive. I’m thinking something similar to bus ETA, like what WMATA uses, something like that. Where we can have warning of notice of a late arrival time . . .If we know, as parent, what’s happening, what to expect, we can make other plans to get our children to school and to get ourselves to work on time. . . I would really urge you to reconsider the staffing levels for bus drivers, because we need to get these kids to school, rather than leave them standing out on the corner for 30 minutes in the morning.

During the Budget Consent Agenda Discussion:

Board member Verjeana Jacobs’s comments at 1:35:03 regarding the value of hiring additional bus drivers vs. adding Lacrosse as a varsity sport:

It’s really disheartening that our employees, bus drivers included, have gone years without adequate funding in the budget, and every year we expect them to just accept that we don’t have money, and it’s just not acceptable .  .  .  A lot of people in my district [District 5], let’s just be clear, love lacrosse. And I do too. But not at the expense of bus drivers who have to get our kids safe here every day, and not at the expense of class size, math specialists, and reading specialists.

END_OF_DOCUMENT_TOKEN_TO_BE_REPLACED

Last night, I attended the PGCPS Board of Education Meeting to hear the members vote on the CEO’s Proposed Operating Budget. The five-hour meeting provided an interesting glimpse into our local county politics. (Click to watch Part 1 and Part 2 of the video of the meeting.) Nearly two hours of the meeting were spent listening to students, parents and community members discuss the impact of recommended school closures and consolidations in southern Prince George’s County. Having faced a similar situation in my Tulip Grove Elementary School neighborhood years ago, I empathize with those families and understand how frustrating the uncertainty can be. As yet, no final decisions on school closures have been made.

A comment I heard multiple times was that the Board Members are elected by us.  However, since House Bill 1107 passed in the 2013 Maryland legislative session, that is not entirely true. HB 1107 changed the structure of the Board of Education and made changes to the position of chief executive officer, formerly known as superintendent of schools. The impact of those changes was evident last night.

Nine of our Board of Education members are elected, and four are appointed by the County Executive.  Moreover, the Board needs a 2/3 majority to override a decision of the CEO, other than a personnel decision. HB1107 also transferred many powers directly to the CEO, appointed by the County Executive.  Under the new law, the PGCPS Board of Education is charged with only two responsibilities: 1. Raise the level of academic achievement of the students in the Prince George’s County Public School System; and 2. Raise the level of engagement of parents, students, and community as a whole. Other responsibilities, including school closures, belong solely to the Chief Executive Officer. It is an important distinction, as the voter’s influence in choosing the CEO comes from our election of the County Executive rather than the Board of Education.

END_OF_DOCUMENT_TOKEN_TO_BE_REPLACED

The Prince George’s County Board of Education held its third and final hearing Tuesday on the fiscal year 2017 operating budget. The hearing was well attended, and many of the speakers and audience members arrived on a bus chartered by Casa de Maryland in Langley Park. Video coverage of the meeting will be posted on PGCPS’s Youtube channel.

Board Chair Segun Eubanks reminded participants that comments would be limited to three minutes per person. He also noted that the Board is scheduled to adopt the budget at the February 25th Board meeting, after which it will be sent to County Executive Rushern Baker.

Fifteen people spoke at the hearing. Their comments are recapped below:

END_OF_DOCUMENT_TOKEN_TO_BE_REPLACED

The budget question and answer session organized by Prince George’s County Advocates for Better Schools on February 4th was a success. Despite the need to reschedule the event due to the snowstorm, the meeting was well attended.

The agenda for the meeting was straightforward. PGCPS Budget and Management Services Director John Pfister provided an overview of the budget, followed by a lively and informative question and answer session. Among the many topics discussed were special education funding, student based budgeting, technology expenditures, philanthropic donations to the school system, building maintenance, professional development, and the proposed parent university. Mr. Pfister and his staff also had prepared answers to previously submitted questions by PGCABS members.

Residents are encouraged to provide input on the CEO’s proposed budget. See this recent blog post for information about the February 9th public hearing and other ways to make your opinion heard.

Mr. Pfister’s presentation and other handouts from the Q&A event are helpful resources for those interested in the budget:

END_OF_DOCUMENT_TOKEN_TO_BE_REPLACED

CEO Kevin Maxwell and his team are already developing the Fiscal Year 2017 operating budget for Prince George’s County Public Schools and will present a proposed budget to the Board of Education some time in December. On Tuesday, October 13 at 7 pm, members of the community will have the opportunity to present testimony in the Sasscer board room regarding budget priorities for FY 2017. This public input will be shared with CEO Maxwell.

Wondering why we’re already talking about the 2017 budget? Here’s a quick review of the budget process: