Many Prince George’s County residents have received a mailer that contains what appears to be an official sample ballot for the Democratic party. Words in large letters across the top read, “2016 Democratic Sample Ballot; Take this with you when you vote.” The mailer even bears the Democratic logo: a red and blue donkey with white stars.

Moreover, this sample ballot is not actually produced or authorized by the Democratic party. According to the fine print in the bottom left corner, the mailer is authorized by two committees: the Committee to Elect the Sitting Judge, a nonpartisan group advocating for election of the sitting judges of the Prince George’s County Circuit Court, and the Committee for ReCharge At-Large, a pro-Question-D group that supports adding two at-large candidates to the County Council. 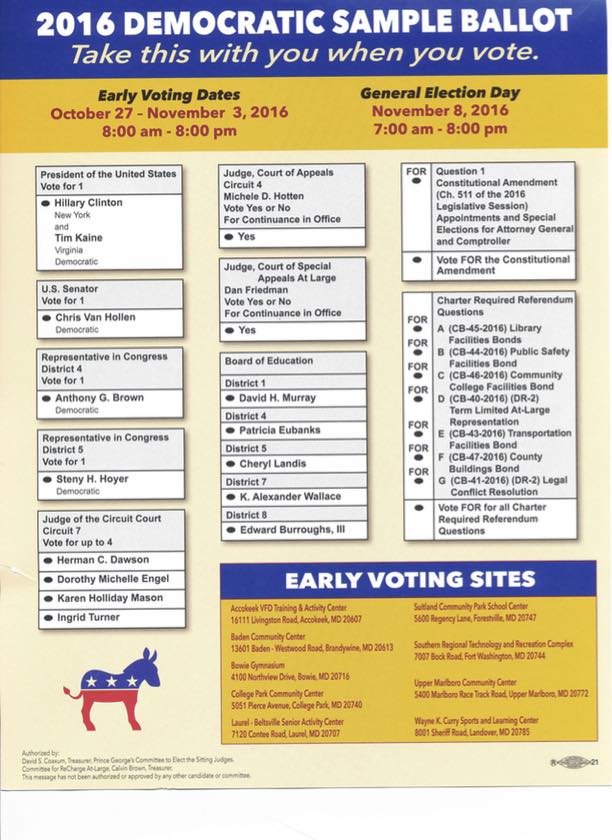 In previous election years, the Prince George’s County Democratic Central Committee has voted to endorse a slate of candidates for the Board of Education. This year, however, the Committee voted against endorsing school board candidates. The Committee also decided not to endorse a position on Question D, which would add two at-large seats to the County Council. But the mailer tells Prince George’s County residents to vote “yes” on Question D, suggesting that the Democratic party officially supports the proposal.

END_OF_DOCUMENT_TOKEN_TO_BE_REPLACED

At a rather contentious and chaotic meeting on September 20, 2016, the Prince George’s County Democratic Central Committee voted against making endorsements in the general election races for the Board of Education (BOE).

At the September 20 meeting of the Central Committee, a motion was made to reconsider the July 19 vote on the sample ballot. The motion to reconsider failed. After this, two new motions related to sample ballots were made, but the Committee Chair ruled the motions out of order.