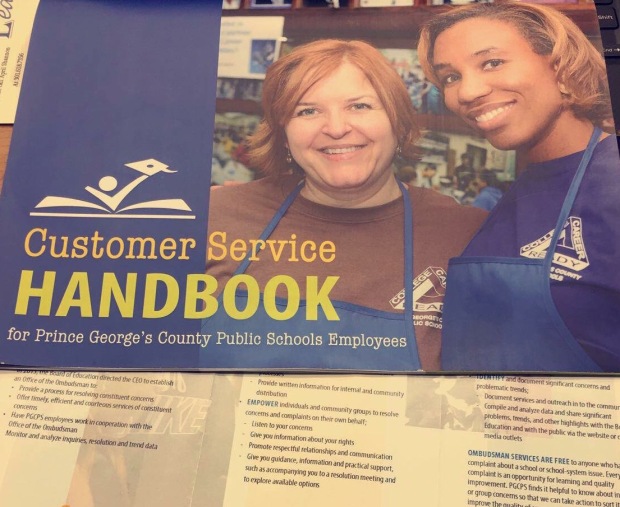 Board Member K. Alexander Wallace (District 7) answered our questions about the new Customer Service Handbook developed by Prince George’s County Public Schools (PGCPS). He also gave us insights into the new “secret shopper” initiative. The views expressed are Mr. Wallace’s own and do not represent those of the school system.

How was the idea for the Customer Service Handbook developed? Tell us a little bit about the philosophy behind the new handbook.

​While the Customer Service Handbook was something developed by the Maxwell administration and through the work of our PGCPS ombudsman, Dr. Edward Newsome, the topic of and discussion around bettering the interactions of all internal and external PGCPS stakeholders ​grew over time through collaborative discussions between the board of education and senior level administration.

As board members, we are often told stories of inappropriate actions, statements, or interactions of staff members, whether it be to a colleague or to a student, volunteer, or family member. Even a few board members themselves have received unsatisfactory customer service from PGCPS employees.

While these actions, statements, and interactions do not speak to the dedication of the vast majority of our nearly 20,000 employees, there is truth to the notion that “one bad apple spoils it for the whole bunch” — pun intended.

What is the timeline for training employees on the new handbook? Is there an initial area of focus (e.g. school offices, secretaries, transportation, etc)?

​The timeline for employee training and the order in which departments are trained will be decided by the administration. ​It is my hope that the training start with our support staff. While every department within the school system is extremely vital, it is a known fact that for every teacher or principal a student interacts with, there are several more support staff members (paraprofessionals, nurses, bud drivers, security assistants, registrars, cafeteria staff, building and maintenance staff, etc.) that students interact with — sometimes before they even step foot into the classroom.

Did looking at other school systems inform the development of the Customer Service Handbook? Who was involved in the creation of the handbook?

​From the briefings​ that I have been a part of, which were open to the public, the point was made very clear that not too many school systems of comparable size and demographic to PGCPS had a formal document that all stakeholders could point to and hold individuals accountable. Due to this, the handbook was formed out of a few key examples, including well known companies and organizations known for their high level of customer service: Nordstrom, Chic-fil-A, Ritz Carlton, etc.